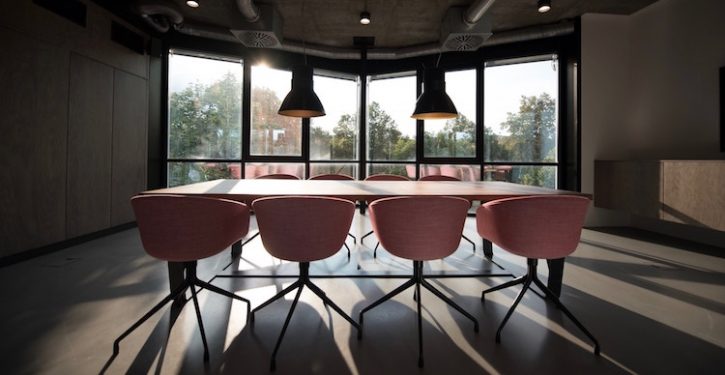 Over the years we’ve witnessed some of the biggest blockbuster films grace our screens and with this, often famous film characters. What makes a great film is the story behind it, however we often remember films because of an iconic character which plays a starring role and leaves an imprint on our lives for years to come. The film industry has created an abundance of high profile film characters which we’ve grown to adore and in some cases admire.

Whether it’s a successful businessman like Christian Grey from Fifty Shades of Grey or a much loved fictional character like Professor Dumbledore in the Harry Potter films, we often remember them for the roles they portray or even a possession associated to them, like James Bond and his beloved Aston Martin cars. One feature that doesn’t spring to mind when we think of most film characters is the office they work from. More often than not we see high profile characters working from a luxury, high-rise office block in New York or another extravagant location. If we look into the finer details and furnishings within an office from the big screen, we can actually take some inspiration for our own office; giving your place of work a hint of some of the most famous films around.

With the help from office furniture specialists Furniture At Work, we can see some 3D floor plans from popular films and look at ways in which they can inspire our office design.

More often than not the furniture is what makes an office. From a desk to filing cabinets it doesn’t matter how big or small your workspace is, you want the best quality furniture. If like Christian Grey or The Devil Wears Prada’s Miranda Priestly you have quite a spacious office, then you may want to take inspiration from them and opt for a decent sized desk. You don’t want your office to look empty so by choosing a larger desk, not only will it take up more space but it will also give you more room to work.

Within your office you want to have somewhere to be able to store important documents and resources. Usually filling cabinets are the preferred piece of furniture for this but you could also take inspiration from Professor Dumbledore’s office in Harry Potter. With an endless amount of books in his possession, he has an impressive floor to ceiling bookcase. You may not want to choose one this big but it shows you a good way of utilising the space you have.

Although an office is a place to work, you want it to be an enjoyable space to operate from. With this in mind it’s important to factor in some interior aspects when designing your office, including flowers and artwork. Wealthy businessmen like Harvey Spector from Suits and Christian Grey are clear fans of artwork. The piece of artwork found in Christian’s office is actually a rare piece and is estimated to be worth around $1.7 million, which is rather unrealistic to you and me. Artwork doesn’t have to be an expensive addition to your office walls as you could opt for family photos or even paintings your children have created in school.

If you like a more floral look then you may want to pay closer attention to Miranda Priestly’s office. To make her workspace look more homely and inviting, she has various lilies, orchids and roses located around the office. If you don’t want the trouble of keeping the flowers alive then you can always opt for fake ones, as you’ll still achieve the natural and colourful appearance.